All of the events in the new Army Combat Fitness Test, or ACFT, are difficult in their own way. Especially if you’ve been accustomed—as many soldiers have—to being tested only on sit-ups, push-ups, and running, having to perform heavy trap bar deadlifts, sled drags, and hand-release push-ups can be a serious eye-opener. But the event that has caused the most problems for aspiring testers so far is without a doubt event number 5 of 6: the hanging leg tuck.

According to Army standards, just one rep of the leg tuck is all you need to meet the minimum requirements for “moderate” Army jobs like drone operator and intelligence analyst. Five leg tucks are required for “heavy” jobs like infantryman and armor crewman. But huge numbers of initial ACFT testers—over half, by some measurements—have found even one rep to be out of the question.

This event has been such a challenge, in fact, that it was the subject of the only major revision the Army has made to the ACFT since it was newly released—what is called “ACFT 2.0.” According to ACFT 2.0, soldiers who cannot perform a minimum of one leg tuck have the option to perform an elbow plank for a minimum of 2 minutes.

However, military sources have stated that the plank isn’t planned to be a permanent option. So yes, it’s still worth your time to train for the tuck. In fact, I would say, you can and should aim to meet the standard of doing five leg tucks, not just one.

It may sound like a reach, but you can do this. Here’s how I recommend training to crush the leg tuck. You can see these principles in action in my BodyFit program Combat Fit: 8-Week ACFT Training Plan. 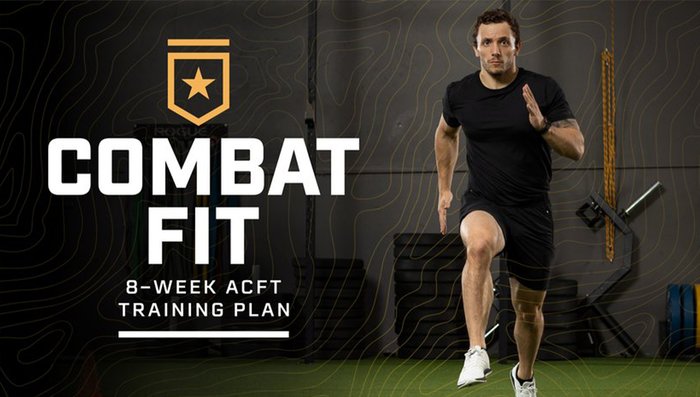 How to Make the ACFT Leg Tuck Instantly Easier

Before we get into the physical training aspect of how to improve your leg tuck performance, I’m going to share a simple technical tip that can instantly make anyone better at the leg tuck. If this test is on your calendar, file this away for when you need it! It’s all about the way you pull during each and every rep.

It doesn’t look like much, but on a tough test like this, that simple lean back can definitely make the difference between “a few reps” and “a few more.” But only if you’ve already been training effectively!

To be clear, just because this strategy makes the leg tuck easier on test day doesn’t mean you’ll want to also use this technique when you’re training. Quite the opposite: you should train by using a full range of motion elbow bend in order to become as strong as possible. This way, come testing time, you’ll be able to combine your strength with this technique trick to crush the leg tuck.

Train hard, test easy–that’s the key. Now let’s dig into what that training should look like.

The Best Exercises to Improve the ACFT Leg Tuck

So how can we crack this movement? It can be tempting when trying to master something you want to get better at—or in this case, absolutely need to get better at—to simply keep trying it over and over again for weeks or months, hoping something will change by test day. But in the case of something as complex as the leg tuck, banging your head against the wall in this way is far more likely to leave you disappointed than triumphant.

If you can’t perform leg tucks right now, the best way to improve at it is to break up the movement into its component parts, and work on improving each of those. That will build the strength you need to access the move.

The three components (in no particular order) needed to successfully perform the leg tuck are: 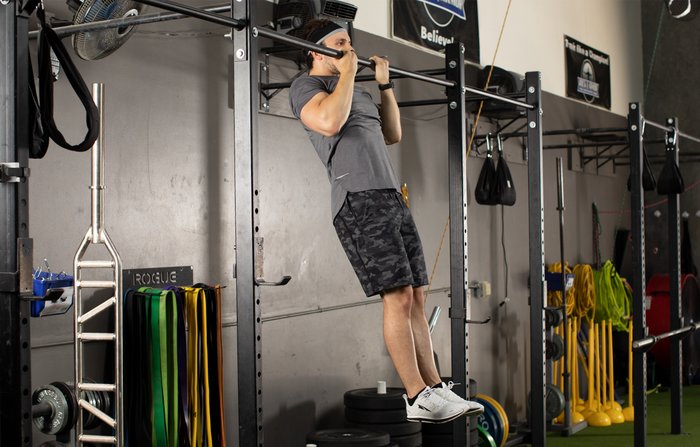 Pop quiz: How long is the leg tuck event? The rules say 2 minutes, but let’s be honest: Nobody’s going to be hanging from the bar for that long, even if they max out the test with 20 reps. So let’s focus on the strength you need to pass, not what you would have in a perfect world.

Being able to hang from the diameter bar for at least 30 seconds is the minimum baseline I recommend having on test day. This is because struggling to do 5 leg tuck reps in good control with take you roughly 15-20 seconds. So, if your grip strength endurance to hang from the bar far exceeds that time frame, you can be confident your grip won’t be the limiting factor in your leg tuck performance.

If grip strength is your limitation, here are two ways to program it:

Simple ab moves like reverse crunches aren’t as popular in strength training as they were a few years back, but this old-school exercise can be your secret weapon in the quest for the leg tuck. After all, the leg tuck is more or less a hanging reverse crunch.

Done strictly, these are hard. But the strictness is essential! Eliminating momentum forces the abdominal musculature to perform the action, which is how you’ll build the ability to power through those last few inches separating your knees from your elbows when hanging from the bar.

Do reverse crunches where it calls for leg tucks in your workouts, pairing them with bar hangs, until you’re able to perform at least 10 reps of reverse crunches in perfect form. Once you can do that, you can progress to these other variations:

If hanging knee raises sound too easy, then I can pretty much guarantee you’re doing them the wrong way: with your legs hanging down and flexing at the hips. If you can perform 5 strict reps where you tuck your pelvis, roll your torso upward, and bring your knees close to your face—followed by lowering to a dead hang under control—then you’ve definitely got the ab strength to perform leg tucks. 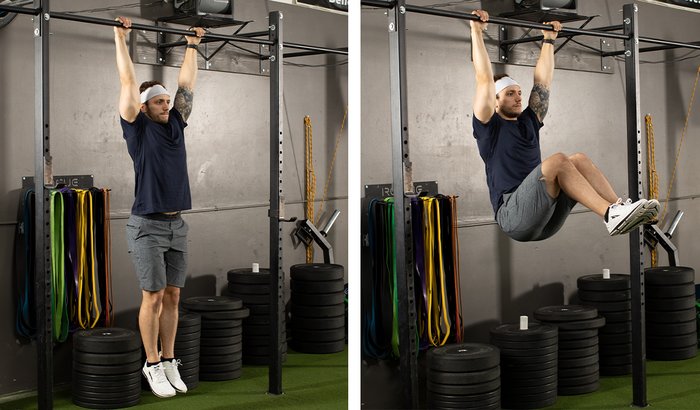 What goes into a leg tuck aside from grip and abs? Back and biceps—also known as those muscles that get worked in pull-ups and chin-ups.

The only problem with those moves is that a lot of the people who can’t do leg tucks also can’t do them. So me telling you, “Go do a few sets of 8-10 chin-ups to get better at leg tucks” isn’t going to be much help.

No, to be clear, this doesn’t mean you need to start doing nothing but heavy singles on the lat pull-down. But it does mean that you can benefit from working toward a solid set of bodyweight pull-downs, even if you’re unable to do chin-ups right now. And if you see chin-ups in the Combat Fit program or another program, you can effectively substitute heavy lat pull-downs for them.

Here’s how to perform the lat pull-down for maximum carry-over to the leg tuck:

I would also recommend balancing some of that two-armed pulling with single-arm pull-downs—which is the approach in the Combat Fit program. However, if you’re chasing a bodyweight lat pull-down, I would perform them in a very specific way: as a single-arm eccentric-overload lat pull-down. 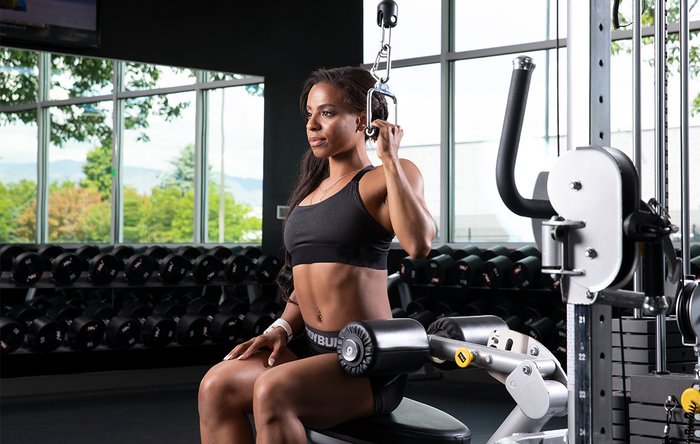 Why focus on the eccentric? Because our muscles are stronger eccentrically than concentrically, and as many people have discovered while training for their first pull-up, slow eccentrics are as close to a magic bullet as there is for that move.

The science backs this up. Researchers in one study found that subjects’ 1RM could be acutely increased by applying a supramaximal load (105 percent of 1RM) only on the eccentric phase of the lift.[4] They found this increase in eccentric loading improved 1RM concentric performance by 5-15 pounds.

Here’s how to perform a single-arm pull-down for maximum pulling strength:

Use both hands to pull the weight down on the concentric portion.

If you can perform chin-ups for reps, though, great! Keep doing them. But also consider doing some pull-down work on another day of the week to really strengthen those pulling muscles, as is programmed in Combat Fit. 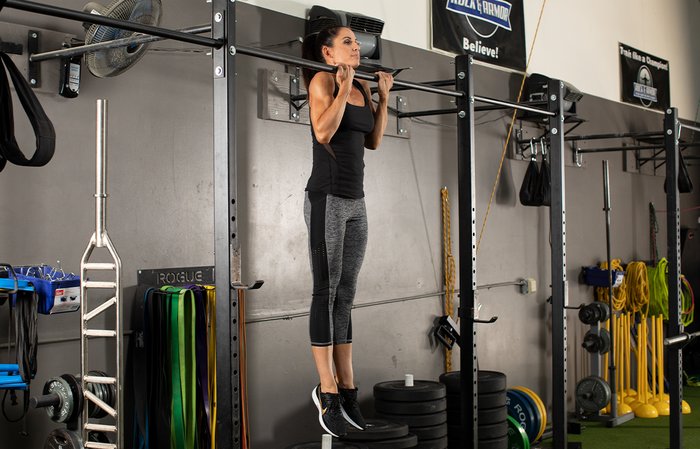 The Other Way to Make the Leg Tuck Easier

All of those training techniques aside, there is one other aspect of the leg tuck that has to be mentioned. It has to do with your body weight and body composition.

Unlike the deadlift, where having a bigger body can be an advantage, with the leg tuck, every “extra” pound on your body is one you have to pull off the ground. And though you might not want to hear it, for many people the best way to improve leg tuck performance is to lose some extra fat.

Here’s why: Leg tuck performance is determined by your relative strength, which is how strong you are in relation to your body weight. It stands to reason that the more body weight you’re carrying, the less work you’ll be able to complete. Think of it like putting on a weighted backpack—you’ll do a lot fewer reps with the weighted pack on than without it.

If this is your reality, then let’s deal with it head-on. Here’s how to lose fat while training for the ACFT:

A comprehensive, progressive training plan like Combat Fit will do plenty to help you strip off any body weight that’s holding you back. You’ll sprint, drag, lift, and do plenty of other hard work that will burn calories while also getting you stronger at the events.

And then, on test day, it will all come together.